Republicans Lay Out Their Plan to Raise Your Health Care Costs

Washington, DC — Republicans on The Senate Finance Committee sent a letter yesterday stating their clear opposition to extending the ACA tax credits that millions currently rely on to afford their health care premiums. Premium savings under the American Rescue Plan benefit millions of Americans who buy health insurance on their own and save families an average of $2,400 a year. Republicans made clear they would repeal these lower premiums. In response, Protect Our Care Chair Leslie Dach issued the following statement:

“Republicans just made it clear, once again, that they’re for higher health care costs. The American people are tired of worrying about the rising cost of health care, and bringing down health care premiums is one of the best ways to take on inflation and get more money in working families’ pockets. While President Biden and Democrats are fighting to lower health care costs, Republicans are following their same old playbook: opposing real solutions to help lower costs and improve care while shamefully playing politics with people’s lives. Republicans have made their pitch: you can pay 15% or more for your health insurance by switching to the GOP.”

How Premiums Would Rise For A Family Of Four Making $120,000 Annually In Each Republican Senate Finance Committee Member’s State: 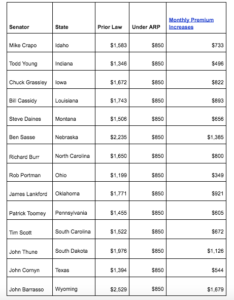